November is always the month that I look forward too cos its my birthday month and also my bestie's. Her bday is only 9 days after mine. Since this year she has a new baby and a new house, I thought why not make something for her and her hub too since his birthday is only 4 days away from hers and include her baby into the picture too? So I decided to make a frame with scrabble tiled names of the family, also adapted the idea from pinterest =) What is the point of pinning and never do them right? 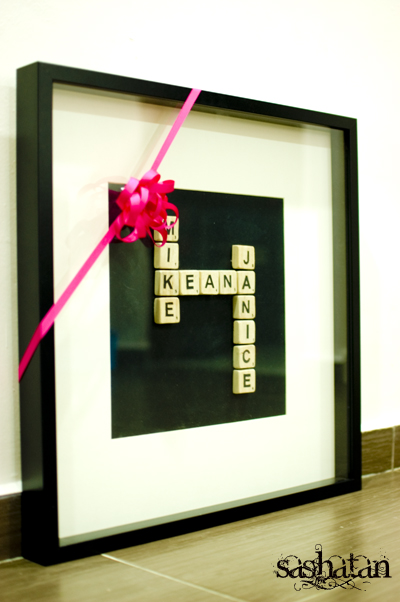 I like the scrabble best cos I managed to put their daughter's name in the middle and connect both of their  names together :)

I went shopping for the items that was needed together when I did this gift for JD teacher's gift. I found the frame from ikea and some "light" wood from Daiso. So when I got home, I quickly started to saw the wood into cubes. 3 cm x 3 cm. 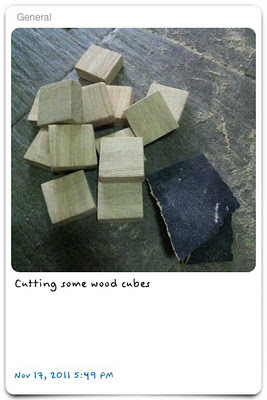 So lastly, I decided to put a layer of celotape on the cube and cut the letters out. Peel the letters out and then brush a layer of paint on it. Voila! As for the numbers, impposible for me to cut the celotape or brush them on. So what to do? Write the number on with ballpoint pen. :) (why never write the letter with the ballpoint pen? cannot... cos it will make the surface jaggered and not smooth. You can only use ballpoint pen for a single stroke letter on wood. er... you know what I mean ah?) 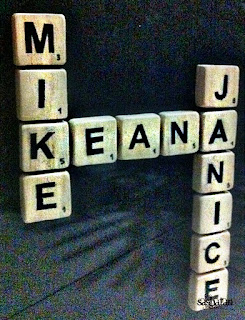 aisay.... didn't take a close shot of the scrabble tiles. This is the closest I took. I have another one but it was blur.

I didn't manage to give it to her before her birthday cos we're all busy with wedding dinners and all. So I gave it to her as her belated birthday gift and also early birthday gift for her husband. They looked happy and pleased (I hope!) and her hub even asked me to sign on it. hahaha oh well.. will be dropping by later at their house to officiate the "art" later. ;)


(UPDATE: lately I have received many comments on this and many also told that I can buy the tiles from some shops and also amazon.com. Thanks! but then I stay in Malaysia and there's hardly any stores here that sells loose tiles like this here and If i were to buy it from amazon, it will take at least 2 weeks for delivery and the charges will cost a bomb (Note 1USD = Rm3.80) But anyway I thank you all for your kind comments and your visit here :) )
Bla-ed by Sasha Tan at 6:48 PM 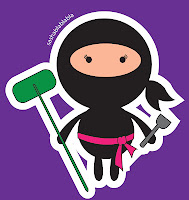